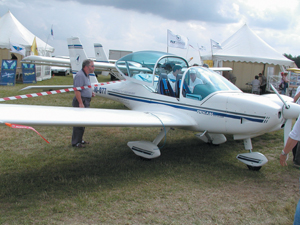 “You’re a pilot? You must be rich!” Isn’t that the impression that many folks have about pilots?

In reality, owner-pilots typically are no richer than those who own a boat or an RV. Many a boat or motor home gets less use annually than our aircraft. And wouldn’t the roads and waterways be safer if trailer-towers and motor-boaters got the level of training that pilots got?

Of course, frugal pilots aren’t poor. They can afford one of life’s greatest toys. The main point of being frugal about flying is that you get more from every aviation dollar spent.

In my last column, I asked for your ways of keeping down the costs of going up, your frugal pilot tips. Here are a few.

Kyle Ludwick of Indianapolis offered a wide variety of frugal pilot tips. First, start out at a small local airport training with a Part 61 (independent) flight school where costs typically are lower. “Yes, students can get certificates faster under Part 141 (FAA-certified schools) with less hours, but it’s definitely not a frugal way to go…” unless you want an aviation career. Kyle later went pro with a degree in Aviation Business Administration and multiple commercial certificates at a Part 141 school – then went on to work for the school. His recreational flying started in a classic Piper Apache owned by a partnership. Now he’s in a flying club through his job and flies their Cessna 172s for about half the cost of owning it outright.

Making a living at flying is a common frugal tip. Kyle Cameron of Whitehorse, Yukon Territory got his AME (Aircraft Maintenance Engineer) licence (similar to the FAA’s Airframe and Powerplant certificate) “so I could do my own maintenance.” Smart!

Humberto Villalobos of Toronto also went professional to fund his flying. His advice: “Become a flight instructor. If you want to learn something, teach it.” He teaches both flight and ground school, recently retiring from his factory job to fly. “I fly about 200 hours a year and love it. I even get paid to do it.”

Chris Strube of Lillooet, British Columbia, is a piano tuner and repairman. How does he afford flying? “I use my plane for business as well as pleasure. This has three benefits: It allows a tax deduction, it lowers hourly costs because I use the plane much more (100-150 hours a year), and it keeps me current and (I hope) sharp.” Chris flies a classic 1965 Mooney M20E with fuel injection. More tips? Chris refills his own oxygen system, filling an aviation cylinder from a larger medical cylinder. And he does all the aircraft maintenance he is legally allowed to do, such as oil changes, plug cleaning, brake pads, etc., using mechanics that allow owner-assisted annuals and repairs. It not only saves Chris money, it helps him better understand his flying machine.

Frank Schilchting of Grand Forks, British Columbia, is a trucker by trade. How does he fly frugally? “An ultralight is the key to affordable aviation. My plane cost is $25 an hour to fly. It only burns 15 liters (4 gallons) of car gas an hour. Why buy a four-place aircraft? How often will you be flying with four people? I cruise at 80 miles an hour. Why go fast? You just miss all of the awesome scenery.”

One more frugal pilot to hear from: me. I pay for my flying as a part-time contractor serving as a small community airport manager. I help the municipal owner keep up on the FAA requirements and grant applications, test the fuel, help manage hangars and tie downs, and promote the airport. Not hard work, but very enjoyable. It funds my flying.